We return to Danny’s toxic period of box-office calamities from 2009 to 2013.

Here it is folks, rock bottom.

In a nutshell: Woody, a Soho pimp, has a very bad week at work.

There I was in Pound Land, the source of many a Dyer Diary film, and there it was. I liked the look of the DVD cover and bet a hundred pennies that Pimp would be 90 minutes of trashy fun. I willingly clicked on ‘play movie’ but then the reality of the situation grabbed me by the throat, shoved me into an alleyway and proceeded to do me in proper.

WHACK!  This is a really nasty film…

SMACK!  …about the horrors of the sex industry…

POW!  …in a faux-documentary style…

A second later and I’m floored. A title card informs us that some of it was shot using concealed cameras, in other words not only does it have a rubbish premise, it can’t even stick to it.  WALLOP!

I curl up into a ball but the blows still rain down.

SPLAT!  It’s all coming apart like wet cake. This is possibly the worst thing I’ve ever seen.

I somehow make it to Danny’s first scene but not even he can save this. Now I’m beaten. Now I’m broken. 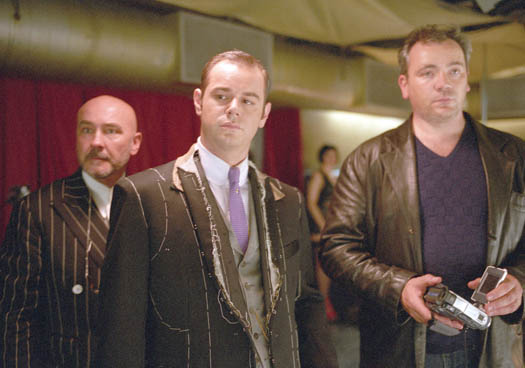 How is it for Danny? Hopelessly miscast as the crime boss, Danny is terrible in this. Really terrible.

Confession time: After ten minutes or so I stopped watching. It wasn’t the violence that made me stop, it was the everything. The everything was just so unspeakably shit. I know this makes me a bad film-blogger but I’m walking away from this one.

Anything else to say? Is there a more wretched movie genre than the mockumentary? Yes it gave us Punishment Park (1971), This is Spinal Tap (1984) and Man Bites Dog (1992) but all too often it’s merely a refuge for shockingly bad scriptwriting (even more so than it’s close relative, the found footage movie). Why waste time on telling a story visually?  Just have your protagonist sit there telling the camera everything they’re thinking.

What annoys me the most is how it sucks all the joy out of bad acting. Chew the scenery, wave your arms around, kick and scream, run with it dammit! Fuck this fake-naturalistic bullshit.

I had no idea I felt this way until I started watching Pimp.