It’s all so vivid; the mad excitement of getting ready, the tell-tale tingles down the scalp, the heat, the dry ice, being able to say anything I liked to anyone I liked and the tracing smiling faces when I tried to take it all in and turned my head too quickly.

We’d arrive around 10pm, already soaring on ridiculous highs and stagger home around 7am, still off our faces and my trousers now three sizes too big. It would go on and on – dancing in the shower, piles of duvets, stacks of videos, bottles of vodka, more grinning, more smoking and more chatting until my brain issued the command, ‘enough’. Twenty four hours of crazy and now was the time to crawl into bed and hope the sleep gets here before the paranoia does.

I was 17 when the last great youth movement was kind enough to deliver love, unity and drugs practically to my door-step. Unfortunately, I was more into Def Leppard and Simple Minds at the time but even this taste in music was soon churned up by the wake of acid house. By 1990 I had done the unthinkable, I had fallen in love with a dance track.

Peek under Willie Thorne’s snooker hall in Leicester city centre and you’ll see where I finally lost my rave cherry, five years later. The Dielectric Club was a dingy, grimy bastard specialising in Happy Hardcore where sweat ran down the walls and rained from the ceiling. And there in middle of it was me, tie-dyed baggy clothing, whistle and white gloves. I’ve no doubt I looked a prick, but, hey, it was the mid-nineties so what else was there? This was nothing to do with the E-Generation, we were speed freaks and I guess the only reason I have such good memories is that I bailed out before the plane flew into the side of the mountain. The paranoia and depression were gate-crashing the party earlier and earlier until one night they arrived before the drugs had even been taken. Plus, there was much better music out there which I could lose myself in without the need for class A’s. This Dyer Diary entry isn’t about how great drugs are, oh no. This is about looking for realistic portrayals of DRUGS ON FILM (nah-nah-nah-nah-nah) drugs on film (umba-umba-umba-umba – DAH).

Right now you’re probably thinking, ‘Man, that guy was cool, and look at those amazing records behind him. Why haven’t I watched Human Traffic recently?’ 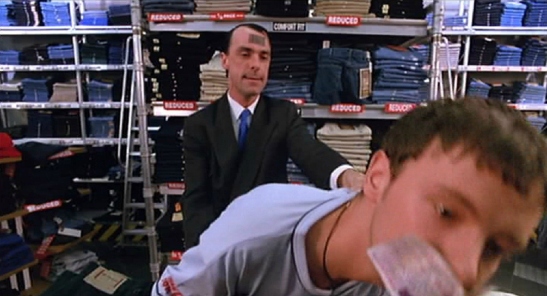 In a nutshell: Not as good as the clubbing episode of Spaced but better than Kevin & Perry Go Large.

Not wanting to come over all Howard Marks (oh god), but drug experiences in films rarely resemble anything I’ve seen or done or heard about. This is partly down to generations of anti-drug campaigns linking drug taking with misery, addiction, illness (mental & physical), death and kittens. Hat-wearing kittens. With guns.

As television and cinema are driven by drama, screenwriters tend to give their characters drugs as a means of getting them to say or do something outside of the realms of ordinary behaviour, actions which will then have dramatic and confrontational repercussions down the line. (As opposed to reality in which people on drugs tend to be painfully dull and predictable). So whilst it isn’t really in the interest of the media to present drugs realistically, this has created a need to occasionally see something closer to the vast majority of drug taking experiences.

At the very core of Human Traffic is the clip of Bill Hicks bemoaning the lack of positive drug stories in the media and stating, for the record, that he took drugs for years, had a great time and then happily got on with his life. Human Traffic grasps his baton (oh) and runs with it (agh) by showing people having drug experiences which don’t end in death, insanity or business men chanting ‘ass to ass’. And to their credit, the makers of Human Traffic were brave enough not to add any unnecessary plot to the narrative. There are no Russian drug lords to run from, no police busts, no gun shots and not one stomach pumped. It’s just a film about a group of friends going out on a bender. Well, almost.

Much of its first forty minutes are spent addressing the alienation at the heart of modern living by looking at unemployment, dead-end corporate jobs, having no family, having to live with a family, getting trapped in conversation with people who you have nothing but indifference for, sex, drugs, life, the universe and everything else in a series of sketches, vignettes, speeches and songs. It’s bold, for sure, but more often than not it smacks of adolescent poetry – sincere, angry and very shit indeed.

Just when I’m about to declare Human Traffic unwatchable garbage in the cold light of 2014 something happens, something wonderful. It occurs when the film quits trying to articulate contemporary social anxieties and instead offers us the sight of John Simm and Danny Dyer genuinely mashed off their faces (the filmmakers obviously thought there are certain things that can’t be faked). Just as the characters lose themselves to the loved-up mass/mess of the club’s dance-floor, the fractured and disjointed narrative comes together as one and, against all odds, we’ve got a proper film on our hands. The film then takes Bill Hicks’s mantra one step further by showing what exactly happens when the drugs wear off and what is left behind. Allow me to explain via the medium of Danny Dyer.

How was it for Danny? Listen hard enough in any major British city at stupid o’clock in the morning and chances are you’ll hear echoing down empty streets a cry of, ‘Nice one, bruvah!‘. Such is the indelible mark which Dyer left on popular culture with his first film role as unemployed drug-enthusiast Moff. I was a fan of the film back in the day but I distinctly remember finding that telephone conversation and that ode to Peter Andre quite grating and, almost fifteen years later, I still do.

It was his reading of the cab scene which won Dyer the highly prized role of Moff and I can see his manic performance working well in an audition environment in front of an eager first time director, but on screen it feels much too much. I’d love to see Danny deliver it at an 8 or 9 instead of cranking it all the way up to 11.

For yours truly, it’s at the party that Dyer really shines and gives the film it’s funniest and truest moments. Moff can be found in the kitchen and, over the course of several scenes, we see his discussion on the philosophy of Star Wars get deeper and increasingly pseudo-profound. It’s hardly ground-breaking at first but laughs are rung from the kind of excitable ‘cod-shit’ that flows in the small hours from the mouths of ravers. It’s how the section ends though that ensures Human Traffic an honourable mention in the big book of realistic portrayals of drug-taking.

In real life, the vast majority of drug experiences end with the drugs wearing off, the taker suddenly feeling mentally exhausted and becoming gripped by the unquenchable urges to be air-lifted home and confess all to their mothers. And yet (adopts David Attenborough accent) it is here in the kitchen that we witness, for possibly the first time in the history of cinema, the very moment that the drug taker’s brain seizes up and says ‘enough’. It marks the exact point when the good times end and everything in the room is consumed by the come-down. It also rounds off Danny’s most critically celebrated performance, and one in which we can see a reflection of the whole film – grating at first, then charming, and then funny and true. And then he gets caught wanking.

Final thoughts: As with any epic undertaking, I started my twenty film Dannython strongly and thought I’d be all done in no time. At the halfway point, I’m starting to flag so I need to get in the habit of writing shorter blog entries. Watching the films is no problem, it’s just all this catching words and putting them in the right order that’s doing my nut. Anyway, in part 11 I’ll be looking at a remarkable phase in Dyer’s career when he worked with two colossi in the acting profession within the space of just a couple of months – Harold Pinter and Vinnie Jones.