The sweet odyssey of an independent British film from ‘the one’ to the £1 DVD bin is much travelled and sadly predictable. The promising script would have been clutched tightly by numerous struggling actors who dared to dream that here was the film to launch or rescue their careers, and good will and adrenaline would have got the production so far. But when financiers pull out with little warning, the most exciting (and expensive) scenes which once leapt off the page now land with a dull thud in the bin. Cue the scales falling from the eyes of the crew, revealing the director as an artless chancer way out of their depth.

If the major pitfalls are avoided and everyone’s hard work does result in a decent little film, the perilous journey isn’t over yet. The limited cinema release (a dozen or so screenings over a weekend) which hopefully will generate reviews in the national press could just as easily result in the tired old ‘X film makes just £500 at the box-office ha ha ha’ story if it’s a quiet news week.

Even if it looks like the film will make it to the all important DVD release unscathed, the distributor’s marketing department have probably tried to boost first week’s sales by packaging a slow-burning psychological drama as a high-octain thrill ride. Bish bash bosh – terrible reviews, alienated fan base and general derision.

No one sets out to make a terrible film. Not even Danny Dyer.

2013 found Danny locked on a losing streak of poorly received or plainly awful films, several of which he had convinced himself would be the one. His confidence was rock bottom, his reputation as a joke seemingly cemented and his chances of decent future roles surely dashed. Things couldn’t get any worse. Actually, they could and they did. The release of Run For Your Wife and the £700-odd it made on it’s cinematic release was heavenly manna for his haters and lazy journalists everywhere. Game over, man. Game over.

And then a script called Vendetta dropped in his lap. This was the one that he had been waiting for, the one in which he could channel all the hatred and the rage of the last few years, a role which would prove to the world what he had to offer. This was definitely it, he had finally found the one.

In a nutshell: Jimmy Vickers is a rogue SAS interrogator who returns home from Afghanistan to do nasty things to the gang that killed his parents. His military handlers turn up to repeatedly inform the audience what an invincible killing machine Vickers is and to tell the police to like BACK OFF and leave this to us. And the police are all like UH-HUH HONEY. And Jimmy’s like LATER LOSERS and that was all I saw.

8.00pm on Friday 16th February 2014.  So we’re about to watch Vendetta and I’m honestly really looking forward to it. The marketing looks good, the quotes on the poster make the right noises, mostly (more of this later), and the synopsis sounds like trashy and ridiculous fun. My snacks are out, your dips look ready, it’s SHOW TIME!

8.30ish It’s the first toilet break and my co-viewer is clearly wondering what the hell I’m making them watch. The tone is overwhelmingly sombre and the violence is decidedly nasty. Fun this isn’t. The filmmakers have aimed for a serious, hard-hitting drama but the writing, direction and acting aren’t up to the job. Also, this is without doubt the least convincing portrayal of the police I have ever seen. 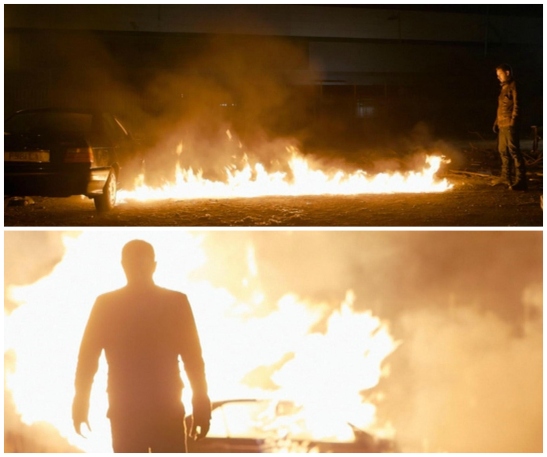 Just after 9pm Things are improving at last. Jimmy’s enjoying himself killing gang members and some of his methods are fairly imaginative (death by force-feeding concrete being the fave). It’s kind of weird that after each of his torture/killing sessions he ends up in bed with his estranged wife, Morgan. The more monstrous he becomes, the more she realises that she still loves him.  It’s during a tender love scene that the high-point of the film arrives – a genuine LOL line of meta-dialogue. Morgan to Jimmy “This can only end badly”.

9.40pm  Wow, that really did end badly. It had actually started being quite good fun but that ending was absolutely terrible. It feels hastily rewritten to boost franchise potential (that modern curse) but it robs us of a satisfying or remotely believable conclusion.

What a poorly written mess. What a massive shame.

How was Danny? This is a landmark moment for Dyer Diary, our first film with Danny in the leading role. Also, despite what the media would have you believe, this is the first time he’s played a propa hard man. He’s been a hooligan, a soldier and minor gangsters but never a killer. Sadly he’s neither convincing as an interrogator nor as an experienced killer (like DiCaprio in Shutter Island, he’s too fresh-faced).

My viewing partner also pointed out the absolute lack of chemistry between Jimmy and Morgan, which begs the question ‘has Danny ever had on-screen chemistry with a female actress?’ Not in of the films we covered so far, and least we forget his attempts at seduction in Freerunner.

His performance is mostly OK but he’s a just bit too light weight for this role. I’ve no doubt he’s got some great performances in him but this sadly isn’t one of them.

What was it really about? Interviews with cast and crew reveal that from conception to marketing, a prime objective for Vendetta was making a British Death Wish (1974). Michael Winner’s tale of New York citizen Paul Kersey being driven to vigilantism is a solidly made urban western featuring an iconic performance from the great Charles Bronson. The main reason if left such a mark on popular culture was that it tapped into the fears and frustrations of American citizens in the early 1970s. The film portrays the police as ineffectual and defeatist, the law courts being more concerned with the rights of criminals, and politicians thinking only of safeguarding their own careers. Movie goers across the political spectrum lapped this up as public confidence in all of these institutions had been seriously eroded by rising urban crime rates.

Vendetta‘s most obvious stab at grounding itself in current affairs comes in a speech Vickers delivers to his (profoundly unconvincing) policeman friend. He defends his judge, jury and executioner routine by stating that ‘the (2011) riots were just the start of it’. (Considering that the riots were triggered by an armed policeman shooting dead an unarmed suspect, Jimmy’s actions seem more than just a little provocative, no?) His speech echoes Death Wish by portraying the police as powerless. ‘What happens if you do catch one of them? You try and put them in some cushy little jail where they sit on their arse all day playing videogames.’ So far, so Daily Mail. Even more chilling though is how he concludes by stating that ‘Britain has a generation of offenders it doesn’t know what to do with.’ And setting them on fire/filling them with concrete/pulling them apart is the answer?

Jimmy is trying to justify his actions by claiming that he is restoring a sense of justice in society by righting a social wrong. And if he did go out killing muggers, pimps, drug dealers and gangsters as they crossed his path, as Kersey did in Death Wish, then maybe he could argue he was acting for the good of a wider society. The trouble is that Jimmy isn’t a vigilante at all, he’s a good old fashioned revenger; specifically hunting down the people who wronged him.

Now this could have given the film a really interesting plot twist. Jimmy could have killed the gang members only to discover (just like Richard in Dead Man’s Shoes) that he was really the guilty one after all. If Vickers hadn’t have been languishing in a military prison on the other side of the world, he could have been on hand to protect his parents. As Vendetta chose to go down the road of serious drama, it needed to give Danny something to really sink his teeth into by doing more with its main character.

As it is, there’s no real transformation for him and no character arc. He starts the narrative as an experienced killer and interrogator and all his character does is become more monstrous. And sulk. A lot. In stark contrast, Paul Kersey undergoes a striking transformation from drippy liberal to blood thirsty vigilante. And despite being a deeply conservative film which endorsed a return to traditional frontier values, Death Wish still warns against the addictive nature of violence. Paul Kersey ends the film as an addict, hopelessly hooked on the thrill of entrapping and killing muggers and incapable of ever re-entering society.

Basically, revengers and vigilantes make good anti-heroes (Paul Kersey and Travis Bickle probably being the most infamous) but by trying to make Jimmy Vickers the good guy, Vendetta comes unstuck and ends up reeking of politics which could make UKIP voters feel queasy.

Before I finish I just have to say one more thing about the quotes on the poster. There can be no question that your career is on the rocks if the publicity material for your latest action vehicle includes the quote, ‘Surprisingly Good’. I mean for fuck’s sake. Kick a man whilst he’s down why don’t you.

But then again my quote isn’t much of an improvement.