The King of Comedy

Here is my piece for the excellent Static Mass Emporium on The King of Comedy‘s opening scenes and the remarkable true events in which they’re rooted.

Even at the tender age of twelve I could tell there was something decidedly sinister about The King of Comedy (1983). Martin Scorsese’s tale of Rupert Pupkin, a mediocre stand-up comic badgering, stalking and kidnapping his way to stardom, felt darker and more disturbing than any of the video nasties I spent the early 1980s gleefully devouring. The closer Pupkin gets to his big break, the more anti-social his behaviour becomes and the more excruciating the film is as a spectacle. Even today, thirty years on, there are scenes which I can only watch through my fingers.

Scorsese described The King of Comedy as ‘right on the edge for us: we couldn’t go any further at that time’.1 This doesn’t just refer to the emotionally and physically exhausting production which lead to Scorsese and De Niro not working together again for almost a decade. It also captures how, when placed within a socio-political context, the opening scenes of The King of Comedy represent filmmaking at its most audacious and (potentially) reckless.

The film begins with the opening minute of The Jerry Langford Show, the long-running chat-show hosted by the man Rupert Pupkin both idealizes as a role-model and fantasizes of usurping. The action cuts to Pupkin amongst a pack of autograph hunters and obsessive fans waiting outside the studio’s stage door. Rupert’s membership of these social groups has allowed him to get close to the world of celebrity but tonight he is not here for merely an autograph. 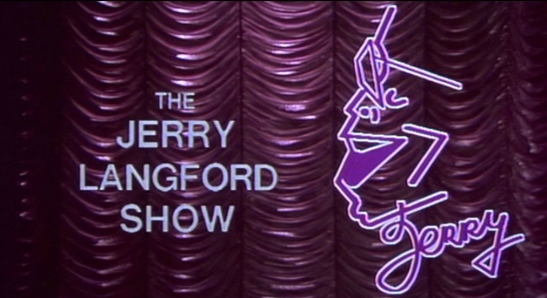 From the controlled environment of the television studio, Jerry Langford and two security guards emerge into the bustling crowd and take the short but perilous journey to the waiting chauffeur-driven car. Scorsese establishes Jerry’s fame and celebrity status as the objects of Rupert’s desire by having Jerry pass before him in slow-motion. 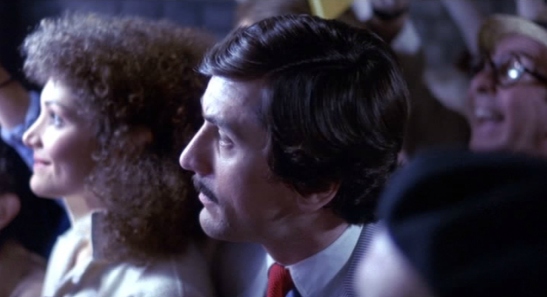 Like an assassin, Rupert follows closely behind. Rather than follow Jerry’s footsteps to stardom through years of hard graft, Rupert has set a trap to gift him the instant celebrity status he craves. Jerry gets inside his car but is leapt upon by Masha, Rupert’s accomplice, who thrashes around on top of him like a wild animal. For Masha, passively consuming the image of Jerry is not enough; she wants to consume him sexually.

Rupert grabs Jerry around the waste and pulls him out of the car but when he attempts to introduce himself his rehearsed spiel is lost in the chaos and cacophony of crowd. With Jerry at the mercy of his baying fans, Rupert forces the crowd back until the security guards can remove Masha from the vehicle. Rupert then makes the bold move of crossing the boundary between celebrity and audience by following Jerry into his car and begging for a few minutes of his time. Rupert eventually convinces him hear some of his stand-up routine which begins a campaign of harassment which will end in Jerry’s kidnapping and Rupert’s imprisonment.

Watching this opening scene today, a film buff may spot how it echoes the scene in Taxi Driver (1976)where Travis Bickle stalks presidential nominee Charles Palantine at a political rally. Travis has vowed to demonstrate his self-worth by assassinating Palantine but is forced to flee prematurely when spotted by security guards. Audiences at the time of The King of Comedy‘s release are likely to have been struck by how this brief scene also addresses a series of remarkable real life events.

On 30th March 1981, President Ronald Reagan was shot twice as he left an engagement at the Washington Hilton by 26 year old John Hinkley Jnr. At his trial, the would-be assassin was found not guilty by reason of insanity, and instead it was Travis Bickle who was held up as the guilty party. Hinkley’s defence claimed that the already disturbed individual ‘absorbed the identity of Travis Bickle’ having watched Taxi Driver repeatedly, adopting Travis’s dress code and becoming obsessed with Jody Foster.2 Like Travis, Hinkley decided to prove himself to an indifferent world by killing a high-profile politician. 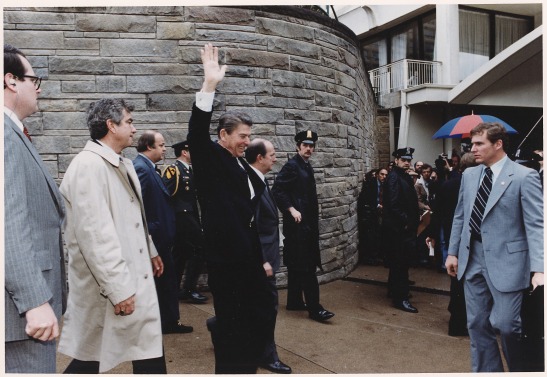 This example of life imitating art (and vice versa) goes back even further. Nine years earlier, on 15th May 1972, Arthur Bremer shot presidential candidate George Wallace five times following a speech, leaving Wallace paralysed. Bremer was a bitterly unhappy young man who felt alienated and unaccepted by society and who became gripped by an overwhelming desire to prove himself with an act of masculine aggression. He wrote in his diary that his purpose was to ‘do SOMETHING BOLD AND DRAMATIC, FORCEFUL AND DYNAMIC, A STATEMENT of my manhood for the world to see’.

After his conviction for attempted murder, Bremer’s diaries were serialised in several newspapers and had a profound effect upon Paul Schrader, a young man who, in his early twenties, found himself divorced, out of work and living in his car. An unhealthy obsession with guns and pornography was born out of this period of intense isolation.3

Drinking heavily and feeling increasingly suicidal, Schrader made a dramatic statement of his own. Over the course of seven days, he channelled his and Bremer’s isolation and frustration into the screenplay for Taxi Driver, later noting ‘it just jumped out of my head like an animal’.4 The script reached Scorsese who recognised his own anxieties and loneliness in Travis. When the film was released, many people connected with its largely sympathetic portrayal of existential rage and social isolation, John Hinkley Jnr being one of them.

Scorsese said nothing publicly on the Hinkley matter for months but finally broke his silence at a film festival press conference by asking ‘What am I supposed to do? Quit? Maybe my films do strike a nerve. That’s what they’re supposed to do’. He had already started working on The King of Comedy at the time of Reagan’s shooting and it was in production when Taxi Driver was screened in court and blamed for turning Hinkley into an assassin.

Those wondering how directly The King of Comedy would address the controversy didn’t have long to wait. The theme of an isolated man lifting his personality from media output is established before the opening credits had rolled, in a scene which replicated the notorious attempted-assassination scene from Taxi Driver.

Even though The King of Comedy was a huge critical and commercial flop on release, revisiting the site of the trauma was a remarkable gamble for Scorsese and one which paid off. He effectively turned the scandal back on itself and defended his right to make films which touch nerves and challenged audiences.5

The exploits of Rupert Pupkin can also be read as an attempt to reclaim the cultural identity of Travis Bickle from the Hinkley case. There are striking similarities between Rupert and Travis beyond them being played by De Niro and directed by Scorsese, both are tragic characters whose unhappy childhoods resulted in a lack of social skills and self-awareness. Both feel driven to commit violent actions in a desire to validate their pasts and win acceptance from wider society (and both are shown succeeding albeit in coda’s which are widely regarded as ironic).