The last time JayetAl performed their live soundtrack to La Jetée, at Ejector Seat’s summer festival, it was a sinister case of life imitating art. Like the film’s protagonists, known only as The Man (Davos Hanich) and The Women (Hélène Chatelain), whose attempts to gravitate toward each other through time and space are repeatedly thwarted by greater forces, a power-cut fifteen minutes in terminated the performance, spitting us out of a wonderful dream back into sober reality. OK, we weren’t sober but as we all stumbled away elated by what we had seen and heard but frazzled from being ripped from the cinewomb, there was the nagging feeling that we were leaving behind a small part of ourselves, trapped in time. Thankfully, JayetAl decided to rescue us from limbo by journeying back to the future (again).

For the best part of the last decade, JayetAl have honed their own unmistakable sound by consistently hitting an incisive line and length between post-rock and electronica. And yet one of the great things about live soundtracking is how the act of collaboration between sound and image leads bands in unexpected directions. Dense harmonic rhythms on the xylophone combine with somber piano chords to perfectly capture La Jetée’s early mournful tone and bring alive the shots of a Paris devastated by World War III, and the network of tunnels which imprison the pockets of survivors, teetering on the brink of starvation and insanity. Their only hope of saving themselves is to travel in time, and The Man is one of the prisoners volunteered for such experiments. When he succeeds in journeying back before the apocalypse and begins a relationship with The Woman, a more tender and reserved side to JayetAl is revealed. Subtle chord cycles, and a lighter and more playful xylophone style, replicate the warm fuzzy glow of love (or dreams of love).

As the young lovers, Chatelain and Hanich give stunning performances, made all the more remarkable as it was their only ever appearance in a film. Like a shuffled pack of cards, their relationship is enacted out of order, so when they get to (re)play their first meeting, they are already intimately connected and comfortable in each other’s presence. This is witnessed when The Man tries to explain where and when he is from; The Women listens intently and doesn’t laugh. When their relationship reaches its zenith, as they lay in bed together, La Jetée briefly switches from a series of still images to a moving image of The Women blinking and smiling. Like the cloud of pink smoke on the horizon in Akira Kurosawa’s High & Low, betraying the location of the kidnappers in the otherwise entirely black and white film – a trick later recycled with the child’s red coat in Schindler’s List – this momentary transcendence of form has an undeniably powerful effect on the viewers. The girl sat in front of me literally reels in shock and I’m reminded why we watch films with groups of strangers. This thought is replaced by an over-whelming urge to melt into tears, but, thankfully, years of man-training helps me to repress such things.

A key dilemma facing Kathryn Railly in Twelve Monkeys (Terry Gilliam’s loose remake of La Jetée) is whether James Cole is really a time-traveler or just insane. In the original, The Woman accepts the man for who he is and it is left to the viewer to ponder what is really happening. The Man’s adventures in time can be read merely as a figment of his broken mind, as his earliest childhood memory – witnessing a shooting on the observation jetty at Paris-Orly airport – bleeds into a fantasy meticulously constructed in a bid to escape the harrowing realities of being a prisoner tortured and then sentenced to death by his captors.

This is most strongly hinted at by the film’s conclusion, drawing upon perhaps the definitive subjective death fantasy, “An Occurrence at Owl Creek Bridge”. Set during the U.S. Civil War, a captured saboteur is being prepared for hanging on a bridge. However, when he is dropped from the bridge the rope breaks and over the course of several hours he flees from his pursuers through the surrounding countryside. As the story ends, he finally reaches his home and a radiant woman runs from the house to greet him. Before the two reach each other, though, the noose constricts around the condemned man’s neck and he dies hanging from the bridge. This sudden ending is echoed in La Jetée. The Man escapes (or imagines escaping) his captors and travels back in time to Paris-Orly airport. As the live soundtrack builds to a stirring climax, The Man runs toward the embrace of The Women but before he can reach her he shot dead by one of his captors who also travelled back in time. Depending on your reading of it, the film ends with The Man being executed and projecting himself into the figure he saw killed in his earliest childhood memory, or with his shocking realisation that he had as a child witnessed his own (adult self’s) death. 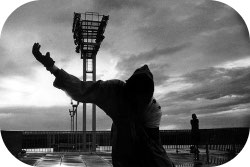 Either way, the abruptness and paradoxical nature of this conclusion can be a traumatic experience even when the film is allowed to run its full course. But this powerful effect speaks volumes for not only how well the film has aged, but how well it is accompanied by the live score. Hidden layers and hauntingly poignant details are revealed within the film and soundtrack with each performance, proving that La Jetée and JayetAl are so right for each other that this collaboration, across chasms of time and space, was always meant to be.

Check out JayetAl’s facebook page for links to their Soundcloud, Youtube and Spotify pages why dont you?

This entry was posted on December 28, 2011 by Jeepers McCoy in Film Review, Music and Film.